I started designing Runeslingers almost three years ago in the dead cold of a Canadian February. The early concepts for the game derived their inspiration from games like Magic The Gathering, Path of Exile (POE) and Dungeons & Dragons. I wanted to capture the spirit of a player versus player battle between two magical characters, but I didn't want to include the summoning of monsters or creatures; that has been done to death elsewhere, leaving little room for me to improve upon it. I wanted a very deliberate and meaningful competition between two spell casters, each trying to defeat their enemy in single combat.

A few core design tenets materialized for me early on in the design process. I knew I wanted 5 classes, or archetypes; four was too few, and six was too many. Five felt right, with enough combinations between them to create a diverse selection of unique play styles for players to choose from. I wanted player turns to be distinct, while maintaining a high degree of player interaction between the passive and active turn player. Additionally, I wanted all the cards to be mixable, and not being bound by class or color; this was one aspect I loved about the YuGiOh! trading card game.

Here is where I developed the idea that the magic of this world derived its power from magical objects. I knew I wanted them to feel a part of the world, and what better way to do so than to use the Earth element as the source of this magic. The runestones were born of this idea. They were magical vessels containing spells of power. A runic etching on their face revealed them as hosts of this magic. Building the lore from here came naturally. The runespell took its name from the runestone, and the Runeslinger took its name from the runespell.

Below are is a history of from earliest to most recent of the various version of the cards in Runeslingers. I went through a ton of designs before I arrived at one that was simple, and showcased the amazing art in the game. 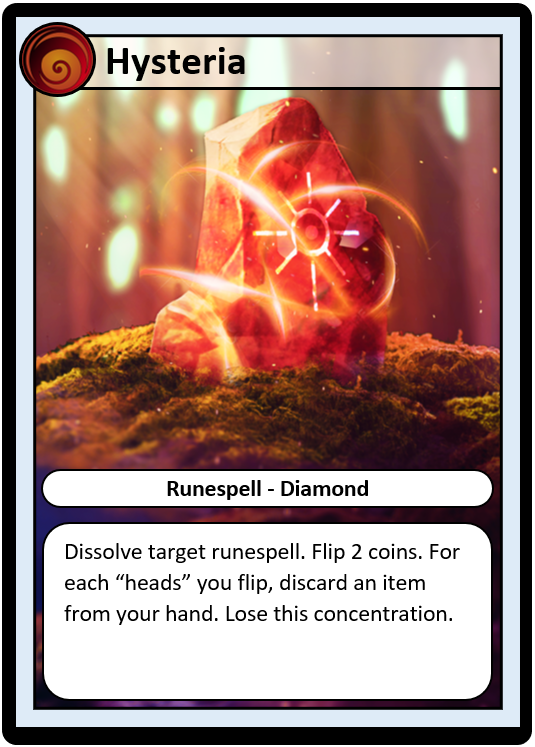 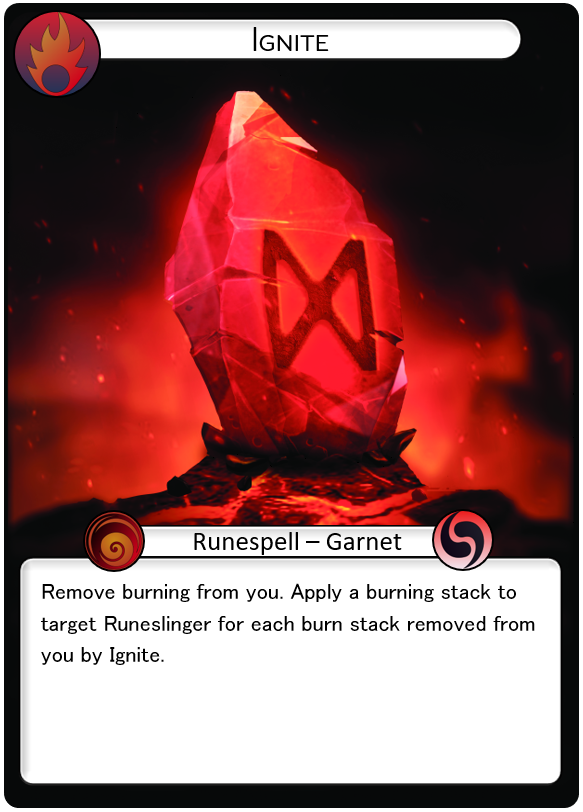 During the prototyping phase, I used game-icons.net to quickly make icons for my prototypes. For anyone else out there making games, it's a great tool!

I built a world in my head, where Runeslingers roamed the land, hoping to discover and unlock the hidden powers of the runespells. A friend likened the idea to Pokemon; you gotta catch em' all!

The central idea of combat pitted two Runeslingers against each other as each attempted to commune with the nearby runestone and unlock its power first.

Now that I had brought these two characters together and given them a reason to fight one another, I had to build out the combat system, resource management system, skills and win conditions. This is where the real fun began...

Since there were no creatures or monsters planned for Runeslingers, I knew I had to have an interesting mechanic to fill that gap. One of the greatest aspects of Magic is the sheer number of options it presents its players when it comes to deck design and construction. Literally thousands of artifacts, spells and creatures, all waiting to be re-imagined into new and exciting overpowered combinations.

I wanted to capture the sense discovery and strategy that made Magic such a great game, without copying it. Having played Path of Exile for almost 7 years, I had really enjoyed the ailments that game used. Different statuses precluded unique play styles that offered a ton of customization options to the player (I should mention the 1400 point skill tree helped). The next step for me was figuring out how ailments would work in a tabletop game.

I'd be remiss if I didn't discuss the idea of cognitive load and upkeep in tabletop games. I was very aware that adding actions the player had to do throughout each turn, and keep track of during a game added "stress" to their enjoyment meter. Also, too many options being available to a player at once can create decision paralyses, turning short turns into long ones and leaving players doubting every choice they make; "what if I did that instead?".

The ailments had to be fun, easy to track, and easy to apply to and remove from a character. I started using tokens with a reference sheet in early prototypes. When a player was ailed with a specific ailment, they would place its matching token on them to indicate they were affected by the "Fragment" ailment. Easy right? Well, not exactly. This made playtesters... annoyed...

Which in the end made total sense. You have these little tokens on your Runeslinger character card, and they don't say anything. This isn't a video game, you need to KNOW what this ailment does and when. Because the tokens were also small (about 0.5" around), players also sometimes just didn't see them. The problems seemed to grow like weeds.

It was also apparent that it was best to get every ailment type on the Runeslinger at once. At the time, I had planned for 8 ailments. This created an absolute slog of upkeep. Players hated it because it was too much to track, and having every ailment on the enemy Runeslinger rendered that player almost completely defeated. This had to be fixed...

Firstly, I made the tokens into cards. If you were ailed with an ailment, you put a card next to your Runeslinger with that ailments description and effect. Next, I got the ailments down from eight to six unique types. After another few months of playtesting, some really cool things happened.

At first ailments did one thing; if you're ailed with Exalt, all healing that applies to you deals that much damage instead. This was fun, but I wanted ailments to get worse for you over time. In Path of Exile, the poison ailment can "stack" infinitely. It has a duration, but also long as you keep applying poisons faster than they can expire, they keep getting more powerful.

The idea of poison in POE forged the way for ailments in Runeslingers to "stack". You could now apply multiple instances of the same ailment to a Runeslinger. To make this more interesting, I added levels to the ailments; from 1-3 "stacks" of an ailment you are affected by the level I effect. From 4+ stacks, you're effected by both the level I and level II effect. This encouraged players to focus on one or two ailment types, instead of all six. Using a dice to track multiple instances of the same ailment type also reduced upkeep for players, making it really easy to maintain ailments.

This is a picture of the first "two-level" ailment I created; Weaken. Weaken was aligned to the Striker class Runeslinger, Romin. After two more years of refinement and a slight change of mechanics, the ailments would become one of the most strategic elements of Runeslingers, adding choices that really mattered to players.

In the next post, I'll be covering the Runespells, Runeslingers and Resource Management System in Runeslingers The Awakening!